Still using your old smartphones model from 3 years back? Or you are eyeing on the new iPhone 7s but not affordable to change it because you are still tied with carrier’s2 years plan? Not anymore! With ‘ReNew+’, changing smartphones yearly is affordable and no longer a dream. 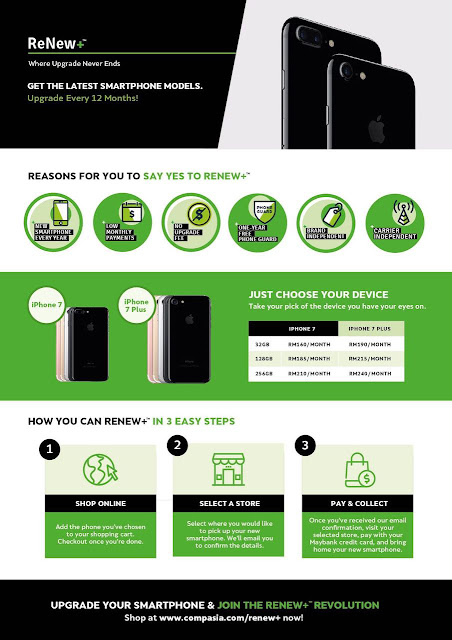 Launched by Regional IT Asset Disposition (ITAD) company,  ComputerAsia Sdn Bhd ( brandname CompAsia), the smart ownership programme called ‘ReNew+’ is set to fundamentally change the way people buy and own their smartphones in Malaysia, Singapore and the Philippines. The introduction of ‘ReNew+’ marked a rare pioneering move ever undertaken by an ITAD company to penetrate and compete in the new smartphone devices markets in these countries. 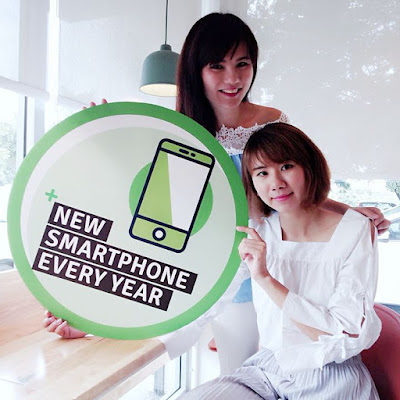 Set up in 2012 to reinvigorate and impact the ITAD industry Asia-wide, CompAsia operated its first facility in Petaling Jaya in 2012 to undertake secure data removal, repair, rebuild, refurbish and remarket used consumer electronics such as laptops, desktops, servers, PC monitors, tablets and smartphones. The refurbished machines and devices are sold directly to consumers via its optimised online retail store (www.compasia.com) and its distribution channels located nationwide. 4 years later today, CompAsia has also expanded to Singapore and built its second ITAD facility in the Philippines in 2016, as the Company continues to grow to become one of Asia’s leading and trusted suppliers of professionally-refurbished consumer electronics, IT and telecommunications equipment. 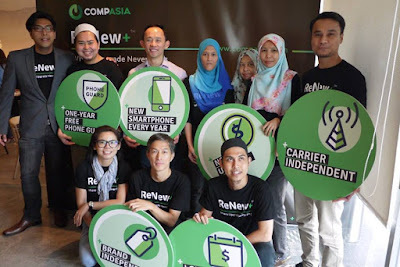 With the maiden launch of ‘ReNew+’ in early November 2016, CompAsia has just made buying a new smartphone every year more affordable. This smarter upgrade programme unleashes its first product offering - it allows customers in Malaysia to pay only a low monthly fee for a new iPhone 7s or 7+ and also allows them to trade them in after 12 months of payments to get the next generation iPhone without the hassle of any upgrading or termination fees.

Customers just need to purchase the latest iPhones from CompAsia‘s online store at www.compasia.com or from the participating stores of its collaborating partners. Tied to MayBank’s EzyPay that offers an interest-free instalment plan of up to 24 months, this robust upgrade programme allows eligible customers purchase the new iPhones using Maybank’s credit cards. With low monthly payments and no upfront payment, ‘ReNew+’ also comes bundled with ‘Phone Guard’ that provides a one-year free protection for cracked screens.

In a nutshell, ReNew+ is uniquely designed to provide a smarter choice for owners who want to upgrade their high end smartphones every year. However unlike other traditional plans offered by local carriers, ReNew+ is uniquely carrier-independent as it frees users from having to be locked to a single carrier for two years. This super-flexible upgrade plan simply allows owners the freedom to choose new carriers or even continue with current ones. More significantly, users are also free to switch carriers even after 12 months without the hassle of getting out of a carrier’s specific two-year plan. 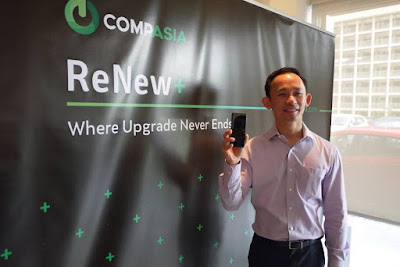 “ReNew+ is launched to initially offer upgrades for iPhones because there is always a great demand for them in the resale market as these cherished premium-priced iOS devices are still unaffordable by many in the developing Asian markets. Additionally, iPhone users tend to upgrade more frequently than other smartphone owners,” said Julius Lim, CEO of CompAsia at the launch event that was held at Food Foundry, PJ.

He added CompAsia’s aim was to be able to offer more choices and flexibilities than current traditional consumer OEMs and local mobile carriers because majority customers just wanted a hassle-free and good early upgrade deal. With ReNew+, he said customers have now become aware that there is a different way they can actually buy and sell their smartphones.

“We hope ReNew+ can impact, if not, ‘uberized’ the way smartphones are being sold and bought here in Malaysia, Singapore and the Phiippines. The ‘uberization’ of this smartphone market is just getting started and we can expect to see new and smarter ways of maximizing utilization of capital and assets to tap both the forward and reverse logistics of the smartphone supply chain. Clearly the smartphone market and its development are accelerating so rapidly making it the next big business ripe for Uberstyle disruption,” he opined.

He went on to explain again, “Unlike OEMs and carriers who are focusing on selling the latest flagship devices to encourage upgrading so as to shorten their replacement cycles, CompAsia instead, is set on ensuring a steady supply of used devices to encourage re-use and longer-use. Ultimately we want to make it easier for smartphone users to sell their used devices as too many may end up in a drawer rather than being resold. Our aim is to make that process convenient and easier to allow reuse and longer-use devices to thrive so that consumers and the environment are protected from the unnecessary costs of premature obsolescence. We believe we can maximise the value & environmental benefits of re-use if we retrieve the used devices as early as possible.”

“We aim to maximise the lifecycle of every smartphone and we will reuse and repair until it has no re-use value before we recycle them. We strongly feel re-using them is a great technology choice that can help reduces the overall impact on the environment. Sustainability has always been the core driver of our ITAD business at CompAsia. Deloitte Global has predicted one billion smartphones will be purchased as upgrades for the first time in 2016. So what happens to older ones? As such we feel moving forward in the supply chain to tap the new smartphone devices market is a right move for us especially given how the smartphone market is primed for such massive growth,” he added.

“Today CompAsia is expanding beyond ITAD and ReNew+’s debut today signals CompAsia’s push into the new smartphone devices business. Like any other businesses, we have long been attracted and committed to finding new, innovative and transformative ways of driving growth in our ITAD business and ReNew+ is just another step in that direction. We view the ReNew+ as the right strategy at the right time to catalyze upgrades. ReNew+ is a relatively straightforward way to get more users to give up their older phones when they decide to upgrade to the most newer/recent smartphone. RENEW+ is set to fundamentally change the way people buy and sell their smartphones," Lim emphasised. 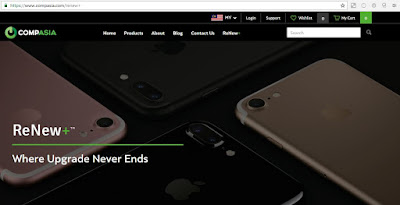 “Getting into this new smartphone devices market is going to be another exciting challenge for CompAsia but we have the right drivers and experience - as a leading ITAD player, we have been helping consumer OEMs and carriers refurbish their used smartphone devices thus allowing them to unlock additional value from their own reverse supply chain. We have the necessary infrastructures in place such as the two ITAD facilities in Malaysia and the Philippines to undertake professional refurbishing activities and more importantly, the secure removal of data in second-hand smartphone devices. We are a leading player in the resale market for re-used smartphones which forms a significant part of the mobile ecosystem so it’s a logical move for us to want to participate in the way new smartphones are being sold too.”

“However a new phenomenon has recently emerged causing the mobile ecosystem to go an even higher upswing when consumers, OEMs and even carriers are now increasingly embracing the practice of selling or acquiring second-hand smartphones via upgrading or trade-in programmes to accelerate their smartphone replacement cycles. These upgrades will also fuel the explosive growth of second hand smartphone sales. Clearly the rise in smartphone reuse will impact not only the sales of new units but obviously it also affects the market positions and revenue streams of everyone who is involved in the smartphone supply chain,” he added.

Lim finally disclosed: “CompAsia’s ReNew+ will also be unleashing yet another exciting upgrade opportunity for high-end Android devices by early next year too. More significantly, it is set to be ‘brand-free’ as qualified customers can also upgrade their smartphones to different high-end brands.”

It doesn't seem very low after factoring in mobile + data package. I for one am unwilling to commit monthly payments on something that depreciates in value.

I'm waiting for the Android programme..

missed out this event as son tuition changed to pagi.
glad to know this from here :D

I am checking the website now! The deals and benefits they offer is really good =D

Seem not bad. But I always prefer buying a phone without monthly payments package.

Will check this out. Looks affordable and good.

Wow! This is amazing if we can get to.upgrade and change handset every year.

Now I can own a new phone with Renew+. Seem the packages that compasia is affordable and attractive.

This is very tempting! Now I want to get the next iPhone 7

I think people like me who always want to try out new technology would love this scheme. Looking forward to use it.

Interesting concept, and i think this benefits a lot of consumers like myself. :) thanks for the post!

a good way to enable us to change our smartphones every 12 months without being tied to any carrier contracts. Good stuff!!

Love their concept of doing things. I can save more from the platform here.

I think this is a good way to get cheap phones. More people can afford them.

This is an amazing concept! It allows you to upgrade your phone from time to time

Definitely caught my interest with this new concept. Surely it is gonna be popular amongst a lot of people

I'm digging this....this would help me explore my favourite smartphones with ease..

Wow great plan, I actually considering this too :)