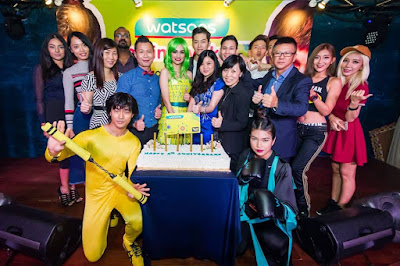 “This is our opportunity to say thank you to Watsons VIP Members who has been with us since the beginning. We continue to provide our VIP Members #PalingSyok experience with our members sale and rewards,” said Caryn Loh, Chief Operating Officer, Watsons Malaysia in her thank you note to business partners and members of the media at the campaign launch. 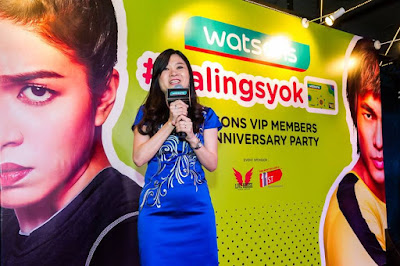 The campaign launch held at Live House Kuala Lumpur at TREC saw guests treated to first hand preview of the Watsons #PalingSyok advertisement which will be shown on paid TV and also made available on Watsons Malaysia’s Facebook and YouTube channel respectively.

Watsons is always providing its VIP Members with money can’t buy experience through many exciting engagements in the past. This include treating its VIP Members to the largest outdoor concert – MTV World Stage 2015; the largest outdoor festival – TLC Festival 2015 and its very own Watsons Move Your Body Zumba 2015 – Malaysia’s largest Zumba activity gathering more than 7,000. 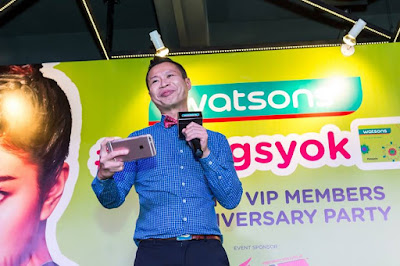 “We are excited to present Watsons #PalingSyok campaign and reward our VIP Members. We have Members Sale up to 50% happening in September and Members Reward which comes in a Watsons Cash Voucher worth RM200 when VIP Members purchase with a minimum of RM50 in a single receipt. VIP Members can also save more with selected products when redeeming with their VIP Points. All this is to give back to our VIP Members with #PalingSyok rewards who have been loyal and supporting Watsons,” explained Danny Hoh, Head of Marketing, Watsons Malaysia in his speech.

Top male model and the face of the campaign Kit Mah shared, “This is my second year involved with Watsons and I am thrilled and excited to be part of this reward campaign to Watsons VIP Members. The production of the viral video for Watsons #PalingSyok is different as compared to last year, and I had to practice some difficult movements. But in the end, it was that thrill and enjoyment to film this advertisement that makes it all worth it.” 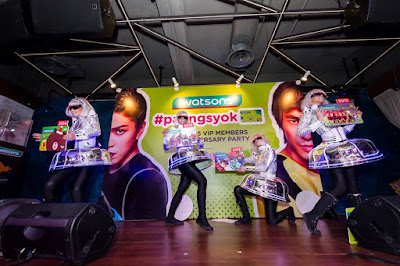 At the campaign launch, business partners and members of the media were treated with a string of performance including special LED dancers which showcased the milestone achievements of the Watsons VIP Card. Live House Kuala Lumpur which is known for its weekly comedy place also welcomed one of Malaysia’s finest comedian, Andrew Netto, who entertained the guests with his humor and injecting Watsons VIP Card benefits between the line. While to hype the event, celebrity sisters DJ Leng Yein and MC Leng Sean got everyone on their feet as they spin to everyone’s current favorite hits. 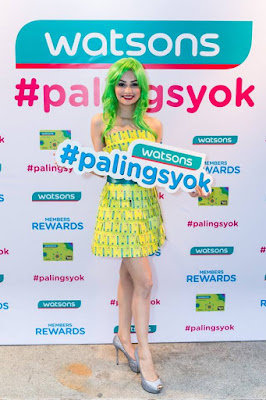 Watsons also put in a surprise when Olivia Nicholas, Miss International Malaysia 2016 turned up in a dress made from Watsons VIP Card and revealing a birthday cake to commemorate Watsons VIP Card 6th anniversary celebration. Caryn and Danny were later joint on stage with the management of Watsons Malaysia.

In conjunction with Watsons VIP Members anniversary celebration, Watsons is also partnering with 11street for #PalingSyok rewards on www.11street.my from 8 September to 26 September.

Bruce Lim, Vice President of Merchandising, 11street said: “11street is excited to partner exclusively with Watsons to celebrate this anniversary with their VIP Members. On our platform, it is no secret that health and beauty products are one of the most popular items among our shoppers. To mark the start of this partnership, we are delighted to offer exclusive promotion for all 11street shoppers, especially to Watsons VIP Members.”
Watsons VIP Members who purchase any products sold by Watsons on 11street will earn double members points. Additionally, there will be four exclusive offers each week and these also come with gift-with-purchase options.

“As a token of appreciation to our loyal shoppers, 11street will be offering free delivery for every purchase above RM50. We are also giving out 20 percent discount coupons with any purchase, so don’t miss out. This is the least we could do to thank our shoppers for their continuous support,” Lim concluded.