Have you watched Stephen Chow "The Mermaid" Movie? I love the movie and it’s my moist favourite Chinese movie thus day in year 2016. The Mermaid is a film that tells the story of a playboy businessman (Deng Chao) who falls in love with a mermaid, Shan (Lin Yun) who was sent to assassinate him. Upon release, this film broke numerous box office records and it will premiere exclusively on CELESTIAL MOVIES (ASTRO Channel 322) on Sunday 2 October at 9pm!

Yeah to Astro CELESTIAL MOVIES subsribers!
Let me tell you 5 things you should know about this show:
1.      The Man Behind the film
·         It is a 2016 Chinese-Hong Kong science-fiction, fantasy, and romantic comedy that was directed, co-written, and co-produced by Stephen Chow. This is his tenth directorial effort.
2.      Popularity of the film
·         The Mermaid was ranked as the No.1 Chinese movie with box office earnings of $7,025,381 in Malaysia and was also the highest-grossing film of all time in China!
3.      Inspiration of the film
·         Stephen Chow was inspired by Hans Christian Andersen's fairy tale of "The Little Mermaid" to produce this film and wanted make it a modern interpretation of the story. Another inspiration came from his childhood, where he lived by the sea and always wondered what life was like under the sea.
4.      What Happened Behind-the-Scenes
·         Deng Chao and Lin Yun ended up eating a total of 150 roasted chickens during a multiple takes of an eating scene just to ensure they got the best quality shot.
5.      Moral of the story
·         Liu Xuan’s development project had a direct impact on the merpeople, killing many of them and he only managed to save Shan by sending her back to the ocean so she could escape from this. Learning from his mistakes, Xuan set up a scholarship for research on environmental protection.

If you would like to watch The Mermaid all over again, please tune in to CELESTIAL MOVIES (ASTRO Channel 322) on Sunday 2 October at 9pm to catch this billion-dollar Chinese blockbuster! 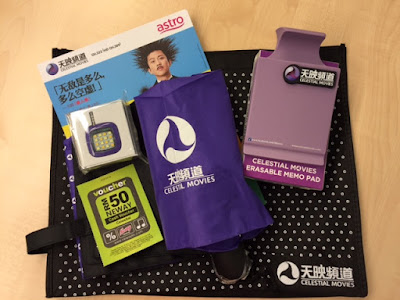 As you seen in the title of this post, there is a giveaway from me too! The Mermaid fever continues with this simple Share-and-Win Contest! Simply share the first visual in your social media and hashtag #ILikeCM #TheMermaid to win some exclusive Celestial Movies merchandise consisting of a tote Bag, selfie LED flashlight, erasable note pad, umbrella and RM50 Neway Cash Voucher!

Submit  your name, email address and your social media links by commenting on this post. There would be 3 winners for this simple Share-and-Win Contest.

All the best to all the participants. And i love stephen chow movie

Good luck to all who entered this... hope you win.. I just want to watch and enjoy the movie... hehehe

one good movie to watch! I watch it already. Good luck for those who participate!