Attention all Malaysian parents! The best thing of 2017 has yet to come until you read this! Do you know that your child could be the next shining star in the international arena? Across the globe, LEGO is searching for the next designer to partner for the new LEGO Friends playset. If your child has in mind a fantastic idea for the next social hangout place in Heartlake City, LEGO is ready to see it. And, the ultimate great news is that your child’s design will be mass manufactured and on sale in all Toys “R” Us stores worldwide, along with a personalized minidoll in his/her likeness! 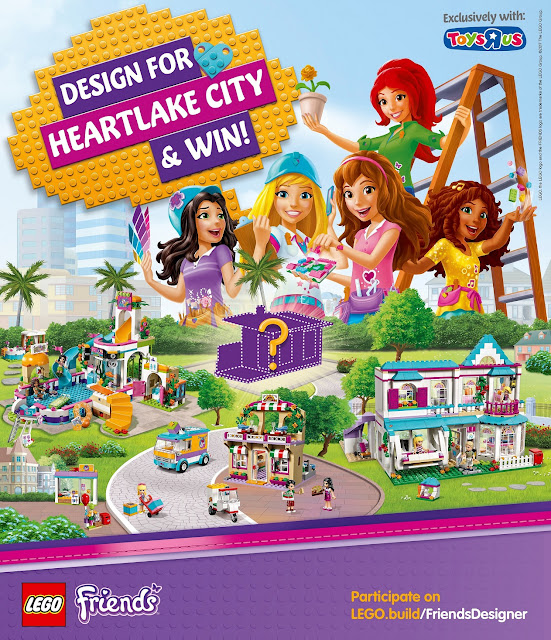 The LEGO Friends Designer contest is LEGO’s first-ever, global crowdsourcing challenge of its kind in celebration of the 5th anniversary of LEGO Friends. This collaboration between LEGO and Toys “R” Us invites children between the ages of 6 and 12 years old to design and build the next concept model for LEGO Friends.

Introduced in 2012, the LEGO Friends is a product range designed primarily for girls. Its theme is centered on the everyday lives and personalities of five best friends in a fictional hometown called Heartlake City. Each of the friends—Olivia, Mia, Andrea, Stephanie and Emma—has a distinct personality and interests, such as animals, performing arts, invention and design – all of which are reflected in the models.

So here’s the challenge: Encourage and inspire your child to add unique touches to the iconic Heartlake City by designing the next hangout place where your child would like to share friendship moments with best friends!

Only one idea will be chosen and turned into an actual model for the LEGO Friends playset and sold at Toys R Us stores worldwide. The grand prize winner for this contest will get the chance to visit LEGO headquarters in Billund, Denmark and become the LEGO Friends designer, participating in every step of the design process of the final model to be sold globally. The winner will also be represented as one of the minidolls featured in the final model.

Simply follow these three easy steps to enter – upload four pictures of the model design showing from four angles, give it a creative title and include a short description to explain the inspiration behind the creation. All entries must be submitted by the child’s parent on Facebook via the LEGO Facebook application available on http://www.LEGO.build/FriendsDesigner before the February 28th 2017 deadline.

Jacob Leighton Rennison, Senior Marketing Manager of LEGO Malaysia said: “We are delighted to announce our first-ever crowdsourcing contest in collaboration with Toys “R” Us. As we celebrate the fifth anniversary of LEGO Friends, we hope to give children around the world a once-in-a-lifetime opportunity to bring their imagination to life. At LEGO, we always believe in inspiring the imagination and developing the creativity of builders of tomorrow. This contest offers every child a great platform to be part of the LEGO Friends creation and shines a light on their immense talent.”

Ms. Carol Chua, Country Manager of Toys R Us Malaysia said: “We are thrilled to be partnering with LEGO to support this first-ever global crowdsourcing contest for kids.  At Toys “R” Us, we are passionate about nurturing and stimulating every child’s imagination and this unique LEGO Friends Designer contest is a new and innovative opportunity to unlock every child’s creative potential.”

To read the complete rules and guidelines for the LEGO Friends Designer contest, kindly visit: LEGO.build/FriendsDesigner