Natasha Poly has taken the fashion world by storm. After winning a modeling competition in Moscow at the age of 15, she made her catwalk debut in 2004 with Emmanuel Ungaro. Since the Fall 2004–Winter 2005 season, her talent and determination have led her to appear in shows for more than 54 fashion houses, including leading international brands such as Jean Paul Gaultier, Yves Saint Laurent, Roberto Cavalli, Chanel and Valentino.

Discovered by Carine Roitfeld, then Editor of French Vogue, Natasha Poly has appeared on the cover of the magazine a record-breaking seven times. She has been a Calvin Klein icon, a Victoria’s Secret angel, and, in 2009, was selected by US Vogue as one of the top-models ‘of the moment’.

Today L’Oréal Paris is thrilled to welcome her as an international Spokesperson.

“Natasha has a magnetic beauty that has established her major presence on the fashion scene in just a few years. Stunningly beautiful, our new Russian icon has a glamorous, edgy sense of style, complemented by a striking personality. I am thrilled to welcome one of the world’s most talented Super Models who has truly made her outstanding destiny”, says Cyril Chapuy, Global Brand President of L’Oréal Paris.

At 25, Natasha’s story is a special one. She has followed a unique path that has taken her from her childhood in the small city of Perm near the Urals to international fashion stardom. 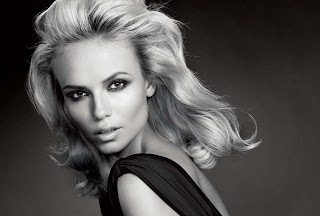 “It’s not a coincidence that I’ve taken on this role with L’Oréal Paris. Before becoming a model, I dreamed of being a professional makeup artist! I’ve always loved cosmetics and I always need to have my L’Oréal Paris products backstage at fashion shows” explains Natasha Poly. “Color Riche lipstick and Elnett hair spray are iconic products for me, and I’m so excited to be representing them”.