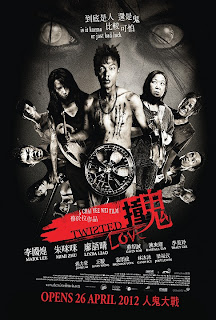 The story revolves around a drug dealer who dated a young girl behind the wife’s back, a pair of con men who wants to turn over a new leaf, and 4 cabin crews whose lives were turned upside down over a fateful night of drugs and booze.

The character Ah-Guan played by Mark Lee, is a non-typical drug dealer as usually depicted by Asian movies. Here, Mark plays a ruffian who is fashionable (at least he tries to be), flashy and a playboy. The first act of the film deals with how Mark tries to kill a girl, Lily(Candy Ice) by crashing his car into a rock, and how that had in turn had led to making a devil out of the girl. In the end Guan is being sentenced to death for being a drug peddlar and in fact the girl friend’s haunting had paved the way for the police to caught up with him.

In the 2nd act of the film, you see how Guan, had previously sold drugs to a cabin crew. The 2 cabin crew boys (Cavin and Randall) then attempted to spike the drinks of 2 other stewardesses (Linda and Tracy) in order to bed them. However, never would they have imagined that one stupid accident would lead to another. You see how a series of unfortunate events can turn on a person’s survival animalistic instincts. It shows how bad intentions can rear it’s ugly head and comes back to affect the cabin boys.

In the final act, story focuses on a twisted family tragedy. Fa, in the course of trying to normalize her own life and that of her daughter’s, killed her abusive husband. But in doing so, she unwittingly unleashed the spirit of the father who now possesses the daughter to create havoc. To resolve this situation, she enlists the help of 2 Chinese mediums but ends up complicating the issue even more.

And among these seemingly unrelated characters, their paths cross and somehow bad luck seems to transcend the characters that have all been “touched by evil”. Director Chai Yee Wei used Guan as a Singaporean (South East Asian) representation of a “modern devil” - often uncouth, yet funny and charming in his own way.

This is a story of individuals with fates intertwined and how their paths clash. A series of twisted events that is a study on cause and effect and how our actions affect the people around us.It summarises how a bad decision to hurt others can return to haunt and hurt you back and that one should always do good to others.