Group Product Manager of Maybelline New York, Pink Fong said that the brand selected the amiable actress for her confident, youthful and girl-next-door qualities, as well as her versatility to carry a variety of Maybelline looks, making her the ideal spokesperson to embrace the brand's energetic, fashionable, glamorous and dynamic New York vibes. 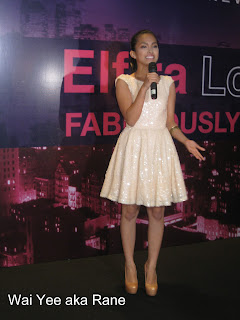 Despite being a newcomer in the industry, Elfira Loy has already made quite an impression on her fans. Having started her career starring in commercial, Elfira Loy, 18, has already picked up a few hosting as well as acting projects under her belt. As a TV host, Elfira Loy has hosted programmes such as Cuti-cuti Famili, Berani Jadi Boss, Selamat Pagi Putera Puteri, Waktu Rehat, and more. She starred as well as guest-starred in several television programmes, such as Cinta, Sabrina VS Sazaly, Rawan Hati Seorang Wanita, Syurgamu Ramadhan, Biar Mimpi Sampai ke Bintang, Kum Kum The Series and more. Elfira Loy is known for her role as Qalesya in the hit drama Qalesya, which won her the Best Supporting Actress award at Anugerah Skrin 2011.

"It is without a doubt that Elfira Loy is the perfect spokesperson for a brand like Maybelline New York," said Fong. "We are very pleased to work with her as we are certain that Elfira Loy will lend her influence and charisma to the brand, bringing it closer to her fans and Maybelline New York users. Not only that, we are very excited of the many new projects we will be working closely with Elfira Loy, which will most certainly drive the brand forward in Malaysia."

As for her role as Malaysia's spokesperson for Maybelline New York, Elfira Loy is truly honoured to be picked. She said. "I've always been a fan of Maybelline New York since I started using makeup. I love the products as well as the trends the brand represents. It is really my pleasure to be part of the Maybelline New York family. I can't believe I am actually working hand in hand with a brand I have loved for many years now!"

As part of the new ambassador introduction program, Maybelline New York showcased the different looks, themed FABULOUSLY 18 created for Elfira Loy using some of the brand's makeup products. It underlined that Maybelline New York is for every woman, especially those with the individuality and boldness to embrace its trendy, versatile and youthful personality.

One of Elfira Loy's favourite looks was the fresh and natural look, which is easily achieved by Maybelline New York Clear Smooth BB Stick Clear Stick. "It really works wonder on my skin by covering up what I don't want to show and yet protects it from harmful UV rays." said Elfira.

"The best thing about the Clear BB Stick Clear Stick is that it makes me look like I am not having any makeup on and yet look fresh and 'alive' all day long! It's like a 'one stick does-it-all' coverage for the face." she added. I can't wait to try  Maybelline New York Clear Smooth BB Stick Clear Stick myself and will write a full review on it soon. ;)

Maybelline New York will roll out advertorials and campaigns in the press featuring Elfira Loy from April 2012.

Maybe she's born with it. Maybe it's Maybelline!