Commemorating the arrival of over 160 award-winning press photographs from all over the world, an official opening event was held recently at the exhibition’s first location in Malaysia, the Kuala Lumpur Convention Centre.
This unique, one-of-a-kind travelling photo exhibition, organized by the Embassy of the Kingdom of the Netherlands and sponsored by TNT Express Malaysia, was opened to members of the public on the 30th of January and will continue to be displayed at the Centre until February 12th; before moving on to the next location at the Balai Seni Lukis building in Melaka.
The exhibition, which brings together award-winning photographs from over 55 press photographers representing over 23 different nationalities, is expected to attract thousands of visitors over the two-week period.
His Excellency Mr Paul Bekkers, Ambassador of the Embassy of the Kingdom of the Netherlands to Malaysia, said in his welcoming speech, “Together with the exhibition’s local sponsor, TNT Express Malaysia; we are delighted to have had the opportunity to be bringing such a high-calibre exhibition here to our shores. The photographs are a clear indication of how important art and culture are in fostering ties between nations as they illustrate these two aspects in the most ‘real’ form.” 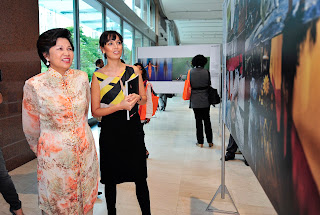 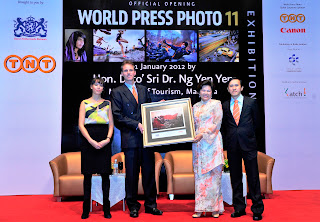 Speaking at an earlier press conference held on the same day, Mr Chong Siang Chung, Managing Director of TNT Express Malaysia, the main sponsor of the exhibition, shared, “In conjunction with the World Press Photo Exhibition here in Malaysia, we are proud to share that TNT Express will be organizing photography workshops in two locations –Klang Valley and Penang on February 11th and March 11th consecutively. We will be inviting more than 30 underprivileged children to experience the world of photography by teaching them the basics as well as take part in fun photography projects; assisted by more than 30 of our very own TNT staff members. Through these workshops, we hope to be able to give the children the opportunity to understand the world of photography on a deeper level and one day, tell a story of their own through their own eyes.” 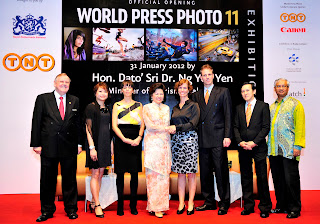 Supported by host venue, Kuala Lumpur Convention Centre; as well outdoor media sponsor, Katchi Group Sdn Bhd; the World Press Photo ’11 Exhibition will be opened daily from 10am to 10pm daily until February 12th.
The following three locations include the Balai Seni Lukis building in Melaka from February 14th to 23rd; the 1 Borneo Shopping Complex in Kota Kinabalu from February 27th to March 8th and the Penang Town Hall from March 11th to March 19th.
World Press Photo receives support from the Dutch Postcode Lottery and is sponsored worldwide by Canon.
EXHIBITION DATES & LOCATIONS
Sharing with you some of the winning photos here.... If you want to view all 177 photos from the 9 categories, please visit the exhibition yeah. Enjoy...  :)