Year 2020 is the year of change. With Covid-19 pandemic still raging, our lifestyle has totally changed. However, it did not stop us for having a fun and entertaining night at Yoodo Community Day 2020. Held on the lovely Saturday, 7 Nov 2020 evening, the Yoodo community have stayed at Home and had fun at the #VirtualLepak event. 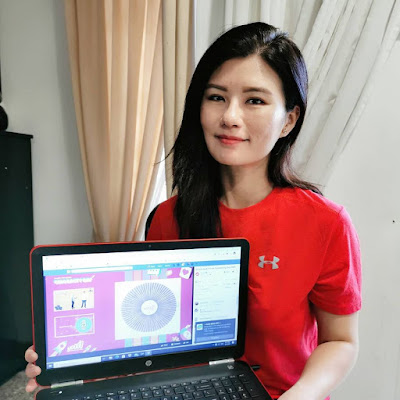 Hundreds of participants have enjoyed themselves at #VirtualLepak #YoodoCommunityDay. Not only we got to know the milestones of Yoodo, there were entertaining live performances and awesome prizes, including Nintendo Switch Lite, Apple Watch SE and Sony Playstation 5 to be won too! Our heartiest Congratulations to all the lucky winners! In fact, every participants are winners because we all get ourselves a Yoodo goodies bag in the end of the event, hurray! 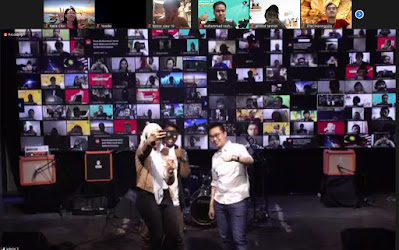 As Malaysia’s first truly customisable and 100% digital mobile service provider that gives users full control to customise their mobile plan in terms of data, voice minutes and SMS to suit their needs, with zero hidden charges or commitments, Yoodo offers exciting product offerings, features and add-ons that empowers users to live their desired lifestyles in gaming, travel, entertainment and more. 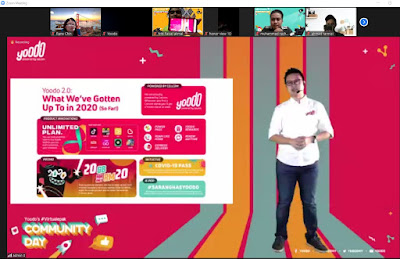 Yoodo 2.0 was unveiled in year 2020. It is the next evolution of Yoodo as a brand and service as it continues to lead the digital telco space. 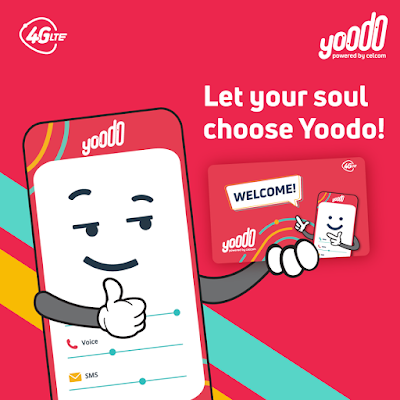 Check out the variety of new product features as shown below;
Renew Anytime

With Renew Anytime, Yoodo users can switch their mobile plans anytime they want.

This convenient product feature removes the need for users to wait for their current monthly cycle to end before switching to their new, preferred plan.

The Power Pass is an add-on data packet that gives you high-speed data in short bursts.

Users can get 100GB of data for only RM2, giving maximum connectivity for ultra-affordable prices.

Wanting to reward users for their loyal support, Yoodo Rewards was introduced to give back to the users for every purchase.

Users are rewarded with one free Add-On for every 10 Add-Ons they purchase.
ADD-ONS

Yoodo also introduced 8 brand new Data Add-Ons this year across gaming, entertainment and e-commerce, bringing the total number of Add-Ons to 18. Add-Ons are additional data packets that do not deduct from users’ data plan.

Recognizing the need for entertainment, particularly during the beginning of the pandemic, Yoodo introduced Add-Ons for Tik Tok, Viu, Dim Sum, Astro Go, and Joox.

Yoodo also brought in an Add-On for Boost to give users maximum convenience for all their online shopping needs.

More recently, Yoodo introduced an unlimited data plan, that allows users to #BuatUnlimitedSendiri and customize their own Unlimited plan. 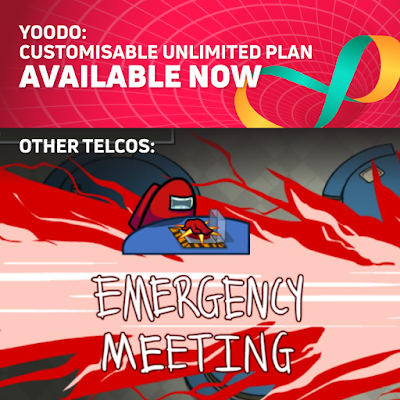 With Yoodo Unlimited, users can personalize every aspect of their plan with greater flexibility.

Yoodo has very quickly established itself as the nation’s most supportive telco in the esports arena.

This began in 2018, when it became the first Official Digital Telco for PUBG Mobile National Championship (PMNC).

Yoodo was the Official Digital Telco for Malaysia’s very first PMNC in 2018.

The champions of PMNC 2018 received a cash prize along with free Yoodo mobile plans for a year.

Yoodo continued its support for PMNC in 2019, once again as the Official Digital Telco for the tournament.

The champions of PMNC 2019 received a cash prize along with free Yoodo mobile plans for a year.

In 2020, Yoodo levelled up to become the Official Partner for PMNC 2020, which drew in over 1.5 million viewers across the tournament period.

The winners of the tournament walked away with RM30,000 in cash.

Yoodo took their commitment in the gaming community a step higher with the first ever PUBG Mobile Campus Championship (PMCC) in 2019.

The champions of the tournament received a one-year mobile plan from Yoodo and a direct invite to the Grand Finals of PUBG Mobile National Championship (PMNC) 2020.

Yoodo brought back PMCC for the 2020 season this year, offering college students across Malaysia a chance at the prize pool of RM 60,00.

Yoodo also launched PMCC 2020 in tandem with the new Caster Search – a special way for aspiring commentators to get in the casting game and commentate on the tournament to a wide range of audience.

Yoodo further extended its presence in the esports scene by teaming up with MyGameOn for the Kejohanan Esukan Kampus Semester 3 (KEK3) in 2020.

Yoodo KEK3 featured the highly popular games, Call of Duty: Mobile as well as Mobile Legends: Bang Bang. The tournament was fully hosted online due to the circumstances surrounding COVID-19.

It received over 3,700 registrations from local gamers and the series on its own drew over 100,000 viewers across three months.

Yoodo also stepped into the fighting game arena with the Yoodo FV Major Cup 2020 – a competition dedicated to Street Fighter V and Tekken 7.

The competition is ongoing with the Grand Finals to happen in September 2020; subject to change based on the COVID-19 situation.

The winners of each game will be awarded with tickets to compete in the international level EVO Vegas 2021. 
Yoodo established Yoodo Gank in 2019 after the team’s epic performance in PMNC 2018. Yoodo Gank has since gone on to become Malaysia’s most popular PUBG Mobile esports team. They have gone on to participate in multiple tournaments locally and internationally.

Geek Fam MLBB has proved to be incredibly successful in MPL, having won Season 3 and competed in the finals for Season 5.

YOODO & ENTERTAINMENT
In 2020, Yoodo sought to bring unique experiences to users through a variety of entertainment approaches.

When the MCO was enforced during the early days of the pandemic, Yoodo introduced #StayAtHomeParty to keep users entertained. The 4-week event featured Malaysian artists from different entertainment segments in live gigs and streaming sessions in smaller sub-events.

Yoodo also tapped into the K-Pop craze and introduced new initiatives to help K-poppers get closer to their favorite idols.

A weekly news and entertainment segment hosted by Hani Fadzil, bringing the week’s latest news and announcements from the K-Pop world.

Yoodo gave K-Pop fans the chance to watch their favorite groups up virtually with ticket giveaways for popular bands – MonstaX and G-Idle.

Yoodo treated BTS fans to a special screening of the recent BTS documentary, giving away tickets to 178 fans, as well as special delivery of fan kits consisting of BTS-themed fan made stickers and badges. 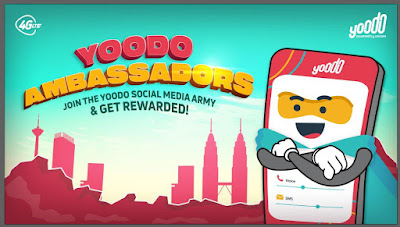 Besides that, Yoodo is looking to reward users and brand amplifiers for their continued support with the introduction of Yoodo Ambassadors. Through Yoodo Ambassadors, not only will you get to help share the incredible Yoodo experience with your friends and family, you will also get rewarded for your efforts by post and promote Yoodo on your respective social media platforms.
To be a part of Yoodo Ambassadors all you have to do is email yoodoambassadors@gmail.com with your full details and social media platform links.
Each month Yoodo will issue Ambassador Missions for you to complete. The more you complete, the more points you get. The more points you get, the better the reward are.

During this initial pilot phase, each Yoodo Ambassador will receive Shopee vouchers as a reward for completing their missions. At the end of the monthly duration, you simply email Yoodo, at the same email address, the links and details to your mission accomplishing posts. Then the team will verify the missions accomplished and credit the corresponding Shopee vouchers on the 10th of the following month.

virtual lepak sounds very cool. although im not a big fan of esport games but yodoo achievement was great! keep it up

Wow......sounds fantastic! This what my girls and I need. Thank you for sharing.

Wow......fantastic! This is what me and my girls need now. Thank you for sharing.

This is so cool I am so going to get one for myself！ Don't mind me asking how to be their ambassador? The program of Yoodo Ambassador look so fun!

Wow that power pass sounds awesome. 100gb for only rm2?? My partner is planning to switch telco. Will suggest Yoodo.

this feature seems so fun. i really love that they reward users with shopee vouchers too for completing their missions

I love the way how yodoo get all theie user in one platform. So many activities and freebis. So cool

The features for Yodoo 2.0 is totally awesome. Customer can customised their own plan and at the same time get reward.

thanks for sharing this, am interested to join the Yoodo Ambassador program, gonna check out more details
cheers, siennylovesdrawing