Sepang F1, what a dramatic race. 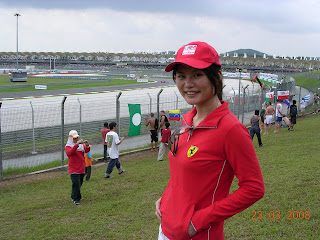 Yesterday was the second F1 race at Sepang Malaysia. This year I watched it from home with hubby due do 7.5 moths pregnancy, however it was more exciting and dramatic than last year while we watched from Sepang Circuit itself.

This year the new team, Brawn Mercedes has the first and forth place in pole position. However, it was so dramatic and changes for the race. Sepang F1 was postponed 2 hours and started at 5pm MYT. While the race started, rain has been expected and at the last 23 laps, heavy thunder rain has caused the red flag, to appear, meaning race has been stopped! And it has never been restarted since then and 2 hours has been passed just like that. Brawn Button has won the race again but pity Trulli was "overtake" by Heildfeld and Glock then. What a race!

I have never saw this in F1 before, I believe so do many other people. The funny thing was, my baby started kicking after the race has been stop by the rain and until it was over, baby only started to calm down. Looks like she'll be another F1 fans in future.... :D

Email ThisBlogThis!Share to TwitterShare to FacebookShare to Pinterest
Labels: Outing